The unofficial forum for supporters of Tilbury FC

After a long and protracted season, it all came down to the final game. Tilbury only needed a draw to guarantee themselves the title, but they were up against a strong Clarion side who were clearly not there to make up the numbers. A win for Clarion would have given them the points they needed to finish fourth in the table. The stakes were therefore high.

The Academy pitch was in immaculate condition having been specially mown and marked out for the occasion. And in true match-day tradition, the weather was awful - wet and windy with driving rain. More than a hundred spectators turned out to cheer on their favourite team which made the atmosphere all the more special.

The first half got under way with the wind at Tilbury's backs. They stamped their authority on the game early on and impressed with their passing and movement in the early stages. Paul Elliot and Tyler White were making nuisances of themselves up front as they were put through on goal with a number of excellent through-balls from midfield. Joe Carter had an excellent chance to open the scoring on fifteen minutes when an excellent right-footed shot from the edge of the box went narrowly over the crossbar.

Tilbury's pressure was eventually rewarded with a goal. Following good work in the midfield, the ball was passed to Joe Carter. He skilfully rounded two players before slotting the ball past the visiting keeper with his left foot on twenty minutes.

Five minutes before the break, Tilbury got a lucky second goal, but it was deserved on the balance of play. Paul Elliot raced through on goal after working hard to gain possession. He scuffed his left-footed shot but the ball somehow trickled through the keeper's legs into the back of the net. The goalkeeper had been excellent up until this point and was therefore very unlucky to concede in this manner.

In the second half, Clarion looked like a different side. They spent the majority of the second period camped in the Tilbury half of the pitch. That said, George Moore almost extended the Tilbury lead when his right=footed volley span off target and clipped the outside of the post.

Excellent work from Scott Thompson and Billy Dahl kept the Clarion attacks away from the Tilbury goal, with a "safety first" policy. Tilbury were forced into counter-attacking but these were few and far between. Eventually however, the game was made safe when Ricky MacCabe made a great run down the right wing before releasing a pinpoint cross for James Wade to head home powerfully - an excellent goal in any division!

The referee ended the game a few minutes later. The Tilbury players were congratulated by the Clarion players and their Coach - a very nice gesture. Tilbury coaches Lewis and Mark then cracked open a couple of bottles of champagne before the mayhem started:

After Tilbury's only defeat of the season last year, Lewis and Mark foolishly promised the boys that if they won all their remaining fixtures, they'd dress up as women and run up and down the pitch. Well, their word is as good as their bond and they duly slipped into their women's "clobber". The worrying thing is they didn't appear to look uncomfortable at all! Clearly - there's something they're not telling us!

Congratulations go to Lewis, Mark and their squad of players for a very successful season. They've worked tirelessly against some very good sides and thoroughly deserve to end the season as champions. Well done and enjoy a well-earned break over the summer period before doing it all again next season in an even tougher division.

The picture below shows the new champion shortly after the games. 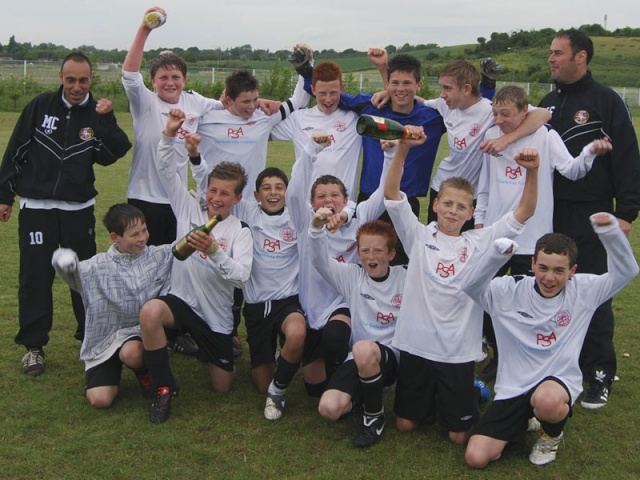 And here's a link to the slideshow with a few more images: link